RECIPES: Warm from the AGA – All Hallows Mincemeat

My Grannie used to make countless mince pies.  Most of them were eaten hot from an old fashioned wire cooling rack and long before she had placed them into the cake tin. Battered and dented, the tin was white with an orange floral pattern which had become scratched and worn from the years of use.

It always puzzled me that she would grumble at my Grandfather and I for eating her baking, and we would tell her that she would be more upset if the pies grew stale in the cupboard.

Her pastry was short and crisp, made with half butter and half vegetable shortening.  But the secret to the enticing nature of these tarts was Grannie’s homemade mincemeat, which was made in late October allowing for a couple of weeks to mature in the larder.

Grannie used to peel and grate her apple before cooking, but I prefer to bake mine in the AGA and then remove the skins.

450g (1lb) unsalted butter, chilled in the freezer for twenty minutes and then grated coarsely

To cook in a 2-oven or 4-oven AGA – slide grid shelf of roasting oven to lowest set of runners.

Place the cooking apples on a baking tray lined with parchment.  Bake for 25 – 35 minutes until soft.

Allow to cool, remove skins and place pulp into a mixing bowl.

Add all of remaining ingredients and mix well to combine thoroughly.

Pot into sterilized jars and seal.  Label and date.

To sterilize your jam jars we suggest that you wash them thoroughly in hot, soapy water and then rinse well.  Place them in a preheated oven for twenty minutes at 100 C.  Allow to cool slightly before adding the freshly made mincemeat and make sure to seal with new lids.  These can be purchased easily online and good cook shops.

Sealed jars should keep up to six months in a cool, dry larder.

Make a few extra jars to give as gifts.

Waste not, want not – as Grannie would say!

If you have any leftovers, add this to your favourite fruit cake recipe or use it to stuff baked apples for a quick pudding. Fold a generous tablespoon into whipped cream, along with some crushed amoretti biscuits for a decadent dessert.

Alternatively add a freshly grated dessert apple and a few leaves of finely chopped sage, mix well to create a stuffing for a boned leg or shoulder of pork.

Mulberry & Fig homewares have been exclusively created for us by artisans located in the West Country, as well as a few especially selected treats from further afield. 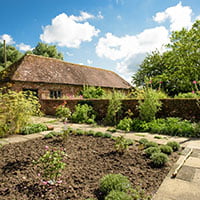 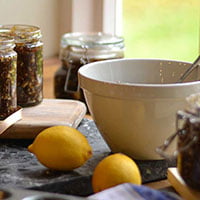 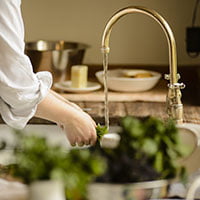 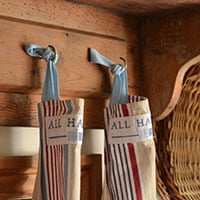